Experienced. Trusted. Dedicated.
Contact Us For a Free Consultation
Member Of: 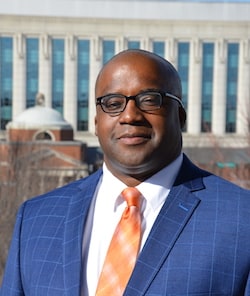 Byron Pugh is a criminal defense and family law attorney in Nashville, Tennessee. Byron represents individuals who are charged with a crime, the subject of a criminal investigation, seeking a divorce or engaged in a child custody dispute. He serves clients throughout Middle Tennessee including Williamson, Davidson, Rutherford and Sumner counties.

Byron began his legal career in the courtroom as an Assistant District Attorney in Davidson County. He was first assigned to the domestic violence team where he prosecuted domestic assault, stalking and harassment cases. There he earned a reputation as a dedicated and effective advocate for domestic violence victims. Byron was on the general sessions team for over a year and gained valuable experience prosecuting DUIs, assaults, thefts and drug cases. For the majority of his tenure, Byron was assigned to Criminal Court where he handled major felonies including first degree murder, aggravated robbery, rape, and domestic aggravated assault.

He understands that people make mistakes and can find themselves in difficult personal situations. Byron will use the knowledge and trial skills developed over time to zealously advocate for individuals going through a divorce or accused of a crime. He will work hard to ensure that each client receives the personal attention they deserve and the best possible outcome.

Byron was raised in Thompson’s Station, Tennessee by his grandmother. She taught him the importance of hard work, honesty and perseverance. Byron is a graduate of Lipscomb University and the University of Tennessee College of Law. While at UT Law, he worked as a legal intern at the Davidson County Public Defender’s Office and a staff writer for Transactions: The Tennessee Journal of Business Law.